Stone Soup Corvallis, Inc. is a non-profit, all-volunteer organization in Corvallis, Oregon providing one full meal each day to any person in need.

Stone Soup began in 1982 at St. Mary's Catholic Church with a free weekly meal. Under the umbrella of St. Mary's, Stone Soup became a member agency of Linn-Benton Food Share. By 1997, community volunteers were serving three meals per week. Westminster House added another meal per week and Beit Am added one meal per month and also supported Christmas dinner each year.  In 2005, First Christian Church became the second full meal site serving three meals per week.  We now serve meals every day of the week, every day of the year. 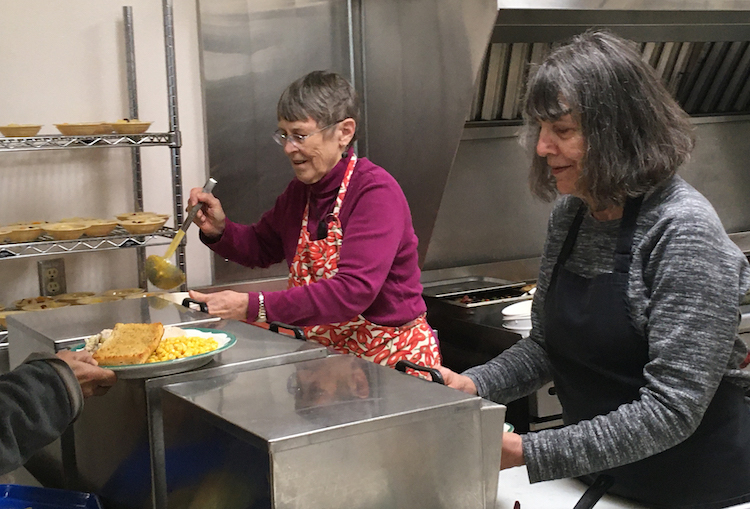 In 2013-14, in cooperation with our hosts churches, Stone Soup Corvallis, Inc. evolved into an independent public benefit non-profit corporation with 501c(3) tax-exempt status from the Internal Revenue Service (IRS). Donations to Stone Soup Corvallis, Inc. are tax-deductible. Our meal schedule has not changed. We continue to use two meal sites and rely exclusively on volunteers to plan, cook and serve all meals.

Our diners come from varied backgrounds. Some are homeless, some have only seasonal work, and some run out of money at the end of the month. Along with a meal, Stone Soup Corvallis, Inc., provides fellowship for the hungry and an opportunity for volunteers, including some former diners, to make a difference in our community. All who work in our kitchens are putting a face on poverty and see people differently because of it.

Feeding the hungry in our community would not be possible without the continued support of our two host churches, who provide free kitchen and dining facilities, including utilities, at no charge. We thank them for their generosity.  We also have support from other faith communities in Corvallis, Oregon, including Westminster House, First Presbyterian Church, First Methodist Church, First Congregational Church, Grant Avenue Baptist Church and Beit Am. We thank you for your generosity as well.

The transformation of Stone Soup into a non-profit tax exempt 501c(3) corporation could not have happened without Susan Dunham, Sue Schulz and Susan Mackey. They filed the papers with the State of Oregon, drafted by-laws, recruited board members, negotiated agreements with our hosts, and applied for 501c(3) status from the IRS. The Board of Directors first met in August 2013, bylaws were adopted in September, and 501c(3) tax-exempt status granted May 2014. Susan Dunham served as first the President of the Board, and continued to serve in various roles until her death in July 2019. Susan was exceptionally skilled at encouraging Stone Soup volunteers, and we miss her presence among us. The vision Susan had and the work she did to establish Stone Soup Corvallis, Inc. goes on. We are forever grateful for her leadership.